Why a Community Interest Cooperative?

Ethstat Ethical Stationery CIC is a cooperative run by the people who work for it and owned by the people that use it. When you buy from us you become a member.  You have a voice in making our decisions and in helping the causes we are passionate about.  We are the only social enterprise in the sector that guarantees 100% of our profit is given away. We use this to help some of the most vulnerable people in society.

If like us, you are passionate about the environment and creating positive change in society your greatest power is the pound in your pocket.  By buying from us and becoming a member you become powerful in the fight against climate change and inequality.  Unlike anyone else we give you control of where your money is spent, the impact it has and in deciding who benefits.  Come,  join us and together we can change the world, one pen, one person, one society at a time. By using us as your supplier you become an owner of our business and you have a share in the decisions we make.

“Every office uses stationery, cleaning products and print so why not buy from a company with the least environmental impact and the highest social change.  You’re spending the money anyway – why not put it to good use?”

Where we’re from life love and work are all intertwined. Yasmin started her first business in 1999; working with her brother Shabbir, she started in toner supplies becoming one of Growing Business magazines founding Young Guns.  At the same time Bruce was Senior Research Fellow at the Telematics in Education Research Group helping to develop the first wave of eLearning.  A chance meeting in 2003 brought them together and a new business and family was born.  One of the things that brought them together was a concern for the environment. Using their skills of research and business, they asked the question “how do you do business that benefits the people who work in it, the planet and wider society?”.

Getting closer to nature and people is supposed to be fun. We have to understand that just because the situation is desperate, and it is desperate – it doesn’t have to be serious.”

The first thing they did was to make their organisation Carbon neutral, becoming the first business supply company to do that in 2004.  Working on the premise ‘if you buy something you own it and all the good and all the bad that goes with it’, they started to look deeply at the products they were supplying.  By 2005 they were asking what the real impact of paper was, what products are made of, where they are made – by whom and how the workers are treated? Sometimes the answers were frightening, sometimes delightful but always insightful. It was then that they hit upon their simple formula for good supply:

Find the best products, made from the least harmful stuff, produced as close to the point of consumption, by people who are looked after and then sell it at a price that makes it accessible to everyone.”

14 years later and their influence has been everywhere. They have worked with all the major political party’s to draft and introduce 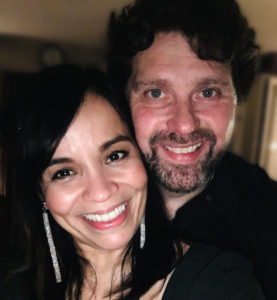 EDM 1221 (proposed by the late Malcolm Wicks and Caroline Lucas) to support sustainable manufacturing.  They have lobbied the stationery wholesalers to reduce their reliance on PVC and vinyl and there are whole catalogues that only feature UK made products.

Today Ethstat Ethical stationery is still at the cutting edge of sustainability,
still innovating and still working to educate the sector on the best green
procurement standards.  Now a cooperative it is working to deliver environmental and social change with its profits going to projects that protect some of the most vulnerable members of our society.  Our projects include helping people with Dementia, the homeless and rootless and our international work.  All of these sit alongside our core work – protecting the environment. We believe that society and environmental issues are two sides of the same coin.

Outside work Yasmin stood for the Green Party as a candidate, volunteers for Nightwatch the homeless charity and is an active dementia campaigner. Bruce is an activist and sports coach in South London working to help young people find a release through sport.  They both agree that that one of the most significant barriers to the public understanding of both environmental and social issues is that while the work is important the image is dour.  If only more people could have witnesses the fun, support and laughter that was had at the Extinction Rebellion protests they would have a much more positive attitude to environmentalism.  We have to understand that just because the situation is desperate, and it is desperate – it doesn’t have to be serious.  We will all achieve more with a smile on our faces and determination in our hearts.

For more than 15 years, we've been passionate about reducing our ecological footprint and improving our social impact

We work with the  majority of regional and local environmental organisations, many nonprofits, and private businesses to improve UK procurement and our carbon footprint.

We tailor our work to our members and their needs. Projects indicative of the work we could do with you include:

The Social impact that we deliver is through the network of expert local and regional charities and social enterprises that we work with in the UK. Every time you buy from us 100% of our profits are given back to those who need it most. Our current campaigns include providing dolls for vulnerable dementia patients to offer unmedicated comfort. Other social impact includes:

We would love to work with you

1. Can you take care of all my purchasing needs for my organisation?

Yes we can! We provide a one stop shop for all your office and organisational needs. From Stationery to Managed Print, Toners, Cleaning Supplies, Kitchen-point and Event Supplies we will show you best practise in ethical and social procurement. Please feel free to give us a call on 0844 335 6382, or email team@ethstat.com and tell us what you’re looking for and we will come back to you either the same day or certainly by the next.

We look forward to hearing from you!

Getting an account with us is really easy because we want to work with you and we want to keep things as simple and transparent as possible.  If you’d like a credit account please email us at team@ethstat.com or call 0844 3356382. We’ll need to know your Accounts Departments email address and contact as well as our main contact for purchasing. We may ask to come and see you to further understand your needs or to see copies of your historic purchasing so we can best understand your ordering trends and budget. We’ll discuss an online account and standing order supplies and determine what will work best for you.

We look forward to welcoming you to our family.

What kind of pricing and service can I expect?

The best kind! Seriously, we believe that there should be no barriers to doing good.  That means the lowest prices and the most professional service. We’re here to serve and do our very best for you.

Signed over the company to the membership

At the board meeting on the 23rd of May, the decision was made to become a cooperative and give the company to the workforce, customers and stakeholders.

EDM 1221 is an early day motion that called on the government to use the opportunity of the credit crunch to build a green manufacturing economy. We drafted the motion and worked with the late Malcolm Wicks and Caroline Lucas to get it discussed in Parliament.

We committed to remove all PVC products from our catalogue and to look at single-use plastic and supply recyclable and reusable alternatives.

Bruce published his first white paper on paper sustainability. This was the first piece of independently funded research on the subject written for buyers by us and contained meta-analysis of work that had been done by paper mills, academic sources and environmentalists. It marked the beginning of a tradition we continue to this day, putting independent cutting edge research into the hands of buyers to make informed choices.  It was also the moment we became known as the experts expert source of advice.

Following a review and independent audit, Bruce and Yasmin achieved carbon neutrality – the first stationery company to achieve it.